“Family member” means a person related to you by blood, marriage or adoption who is a resident of your household.  This includes a ward or foster child.

North Carolina’s appellate courts have liberally construed this definition when  determining whether a family member is entitled to coverage.  On the other hand, the courts narrowly construe exclusions, like the insured versus insured exclusion.

The prior case law addressing resident-relative coverage issues tends to be highly fact-specific and it is challenging to glean universally applicable principles.  Some of the analysis has asked whether there is a “continuing and substantially integrated family relationship” between the insured and the person seeking coverage.  This, of course, does not come from the policy language but is instead an attempt by the court to come up with a test under what it has considered a reasonable interpretation of the resident-relative provision.  This test was first used by the North Carolina Court of Appeals in 1985 in Davis v.  Maryland Cas.  Co.  There, the court reached a relatively uncontroversial holding that a minor whose parents are separated can be a resident of both parents’ separate households.  Whether this test is appropriate has never been put before the North Carolina  Supreme Court.

The Basics of the N.C. Farm Bureau v. Martin Decision

The Court of Appeals recently released its opinion in N.C.  Farm Bureau v.  Martin that seems to walk-back some of the prior case law applying the substantially integrated family relationship test.  The facts of Martin are as follows: Marina Martin and her mother Jean were injured in a wreck.  The Martins lived in a house on the Martin Farm with an address on Bay Orchard Lane.  The Martin Farm was owned by Jean’s mother-in-law, Mary, and includes a winery, pick-your-own orchard and what appears to be a pretty high-class wedding venue.  Mary also lived in a separate house on the Martin Farm.  Her address was on the aptly named Martin Farm Lane.  The houses did share a common driveway and were just a three to five minutes’ walk from each other.  The group considered themselves to be a cohesive family unit and had keys to each other houses so they could come and go as they pleased.  They did, however, maintain separate residences and, except for occasional overnight stays, lived separately. 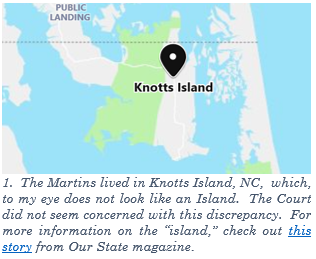 Under these facts, the majority in Martin held that Marina and her mother were not residents of Mary’s household. Critical to its decision was the Court’s determination that a person could not be a resident of someone’s household unless they actually resided in the same building.  It reached this decision by citing to several dictionary definitions, which all defined the term to only include persons that lived in a single house, apartment, dwelling or under the same roof.

These facts had some significant similarities to N.C. Farm Bureau v. Paschal, another resident-relative case issued just a few years back in 2014.  In this case, the named insured lived in one house on the family farm and his son and granddaughter lived on another house on the farm.  The grandfather did not charge any rent, had a key to the house, came and went as he pleased, and paid the utility bills.  After an accident, his granddaughter sought UIM coverage as a resident relative under her grandfather’s auto policy.  Although she was not living in her grandfather’s household at the time of the accident, she had resided with him periodically over the years.  This included one period of about a year while her father was in prison.  During that time, the insured also became his granddaughter’s legal guardian.  The two also considered themselves to be a part of the same household.  Under Paschal, the Court decided that the granddaughter was a resident of her grandfather’s household in part because the grandfather was “the most constant caregiver” and a “regular participant in [the granddaughter’s] life].”

The dissent by Judge Inman in Martin points out some other facts not addressed by the majority opinion that make the Martin case look more like Paschal.  These included that Marina’s parents essentially relied completely on either income from working on the farm, paid to them by Mary, or food stamps.  Their income for working on the farm was also contingent on whether the farm made any money in any particular growing season.  Marina and her family lived on the farm rent-free, paid the costs associated with the house, and also paid the premiums on Marina’s family’s auto policy.

In my view, the decision in the Martin case was correctly decided.  The plain language of the policy requires that a putative resident-relative insured be a resident of the named insured’s household.  As found by the majority, the common understanding of the term “household” is limited to a single building under which persons who are residents of that household live.  Therefore, where the putative insured and the named insured live in separate houses, they are not residents of the same household.

If this case is appealed to the North Carolina Supreme Court, as the insureds will have the right to do because of Judge Inman’s dissent, it will give the Court an excellent opportunity to address whether or not the “continuous and substantially integrated family relationship test” is the correct test to apply under North Carolina law.  In my view, it is not and the Court should take the opportunity to say so.