HAVE A CLAIM INVOLVING MULTIPLE UIM CLAIMANTS?
THE LIMITS MIGHT NOT BE WHAT YOU THINK THEY ARE:
ASSESSING N.C. FARM BUREAU V. DANA

William Bronson drove his 1993 Cavalier left of center and hit Mr. and Mrs. Dana head-on.  Mrs. Dana, the driver, was killed.  A passenger in the Bronson vehicle was also injured, as was the driver of a third car that was struck by debris from the collision.  Bronson had auto coverage with liability limits of $50,000/$100,000.  Mr. Dana and Mrs. Dana’s estate sought UIM benefits from their insurer, N.C. Farm Bureau, under a policy with UIM limits of $100,000/$300,000.

Mr. Dana and his wife’s estate settled the liability claim for $32,000 and $43,750 respectively.  The other two liability claimants received the balance of the $100,000 liability limits.  N.C. Farm Bureau took a reasonable position:  Mr. Dana and his wife’s estate were both entitled to an amount equal to the per person UIM limit less a credit for the liability payments.  The UIM claimants thought that, instead, they were collectively entitled to $200,000, equal to the per accident limits less the total payments made by the liability carrier.  These positions are broken down as follows:

The Court’s holding, as taken by the Court in Dana, can be illustrated as follows:

Gurley actually had the opposite of the situation in Dana.  If the per accident limit applied, the claimants would collectively receive less than if the per person limit applied.  These numbers broke down as follows: 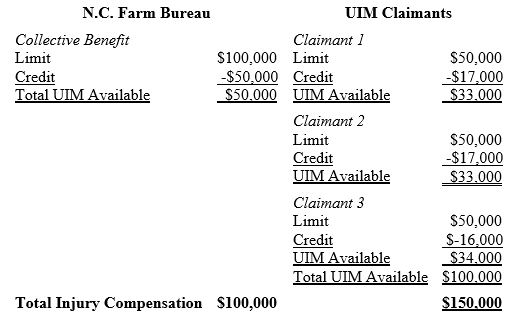 For purposes of personal auto policies issued in North Carolina, the Motor Vehicle Safety-Financial Responsibility Act of 1953 controls over the policy language except for coverage in excess of the statute’s mandates.  The Act provides the following with respect to the UIM limits of liability:

N.C. Gen. Stat. § 20-279.21 (emphasis added).  The Gurley court focused on whether whether the per person or per accident limit was the applicable limit.  The answer to this question, it said, depends on two things:  (1) the number of claimants and (2) whether the liability policy was exhausted on a per person or per accident basis.  Its holding resolved this question as illustrated above.

One problem with the Dana decision is that it fails to give effect to the purpose of UIM coverage.  UIM coverage exists to put the insured in the same position they would have been in if the tortfeasor had liability insurance with limits equal to the limits of the UIM coverage.  This was part of the rationale the Gurley court used to justify its outcome and deny the claimants additional recovery.  If the tortfeasor in Dana had liability limits equal to that of the UIM limits, 100/300, Mr. Dana and his wife’s estate would both have received $100,000 from the tortfeasor.  Because they received less than $100,000, the UIM carrier should be responsible for making up the difference as N.C. Farm Bureau agreed it was obligated to do.  By finding instead that the per accident limit was the “applicable limit,” the court awarded the UIM claimants $75,750 more than what they would have received had the liability and UIM limits been the same.  This is contrary to the purpose of UIM coverage.

Further, the Act’s language for determining the UIM limit does not call for the complicated analysis required by the Gurley decision.  The “limit of [UIM] coverage applicable” is properly understood to mean the limit applicable to the particular claimant seeking UIM benefits.  The per person and per accident limits operate together and not separately.  The maximum applicable limit for any one claimant is the per person limit.  This limit is subject to the per accident limit in cases where there are multiple claimants.  Assuming a policy with liability coverage of 50/100 and three or more claimants, each claimant would be entitled to receive a pro-rated portion of $100,000, but no more than $50,000 regardless of their damages.  In other words, where they are multiple claimants, the limit applicable to any one claimant is still subject to both the per person and per accident limit.

Changes to the Financial Responsibility Act further erode the Dana court’s reliance on Gurley.  The Gurley court noted that its holding was consistent with other portions of the act.  Specifically, the way the statute determined, at that time, whether a tortfeasor vehicle is an underinsured vehicle under the Financial Responsibility Act.  The act defined “underinsured highway vehicle” to mean a vehicle covered by liability insurance with limits less than the applicable UIM limits.  This provision was changed in 2003.  That change added to this definition by including instances where the amount actually paid to a UIM claimant under a liability policy that is otherwise exhausted is less than the applicable UIM limits.  Therefore, the Gurley court’s rationale that the analysis of the two issues should parallel each other is no longer applicable.  Reference to the liability limits is no longer necessary to determine whether a vehicle is underinsured.

The Dana court apparently felt constrained by the holding in Gurley.  It sided with the UIM claimant without much analysis other than its reference to that decision.  In my view, the court missed an opportunity to appropriately limit the application of Gurley to the facts before that court.  The court could have limited Gurley to hold only that the per accident limit of UIM coverage applies even if that means each individual UIM claimant ends up with less than what they would have received under the per person limits.  This limitation could easily be justified by the subsequent change to the Financial Responsibility Act.  Also, the Gurley court’s dicta that the UIM “applicable limit” will always be the per accident limit where the liability policy’s per accident limit is exhausted was not necessary to the Gurley decision.

What all this means

If the Dana decision is not further appealed, an insurer faced with a similar situation will have to either concede its holding or plan on a long fight through the N.C. Supreme Court.  There is time for N.C. Farm Bureau to seek a rehearing at the Court of Appeals or to petition the N.C. Supreme Court for discretionary review.  I hope that it will zealously pursue those opportunities.  Dana is bad law that will significantly increase UIM exposure in multiple claimant cases if its holding is not reversed.